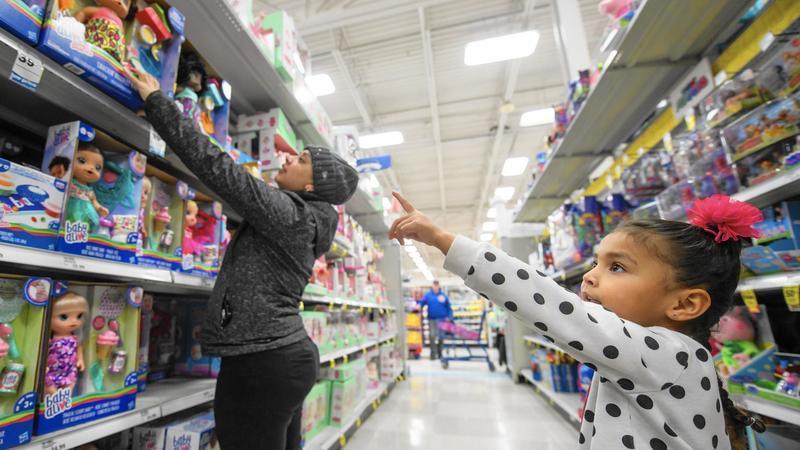 Looking at their shopping cart full of toys, Jordan, 7, and Deegan, 4, said they were anxious to get home to start playing.

“I got a remote-controlled car, and I picked out Mario and Legos and Pie Faced Sky High and a Harley Davidson Motorcycle,” Jordan said.

In their largest event yet, 87 children joined Highland police officers on a shopping spree Dec. 9 at Meijer in Highland for their Cops and Kids events, said FOP President Randy Stewart.

Highland was one of the FOPs and police departments across the region holding similar events during the holiday season. Munster held its the same day as Highland, while Cedar Lake, Gary and Lake County scheduled events Dec. 16.

“By far this is the best thing I get to do all year as union president,” said Dan Murchek of the Lake County Sheriff’s Department.

Portage officers greeted their shoppers Thursday at Meijer in Portage with K-9 Nakir, letting children pet the dog as families grabbed carts. When Nakir barked, the children jumped and laughed.

“I think it humanizes us a little bit in the community,” said Chief Troy Williams.

What Williams enjoys about these events is “the ability to see a kid’s face light up,” he said.

James Maynard, vice president of the Portage FOP, said getting to spend time with people from the community is one “of the best parts of being the police.”

Maynard went through the store with Angel, 13, and her mother, Margaret Zeck.

“I shop here all the time. What are you looking for?” Maynard asked.

Angel was already on her way to the art supplies, something her mother said she enjoys.

“Ooo! They’re neon!” Angel said as she grabbed a pack of Sharpies.

In the board game aisle, Angel added Monopoly and Sorry! to the cart. She showed her mom a game called Speak Out, where players wear a mouthpiece and try to get others to guess what they’re saying.

Officers gave high fives as children pushed their carts with their parents down the aisle. Patrolman Jay Cowger walked around wearing a Christmas sweater with a cat on it over his uniform, making some children point and laugh.

“He was wearing that all day in the middle school,” Williams chuckled.

Usually, the kids make the most of the event, buying as much as they can get in the cart, Stewart said. Then there are the ones like a girl last year who had as smaller gift: a new phone.

In Highland, a family of 10 went through the checkout line with Barbies, art kits and plenty of Nerf guns. An employee said they still had a little more than $ 100 to spend.

As an added bonus, Kevin Raines, general manager of The Sheet People in Crown Point donated a set of sheets to each kid in Highland. And afterward, John Golfis, of Blue Top Drive-In, treated the police and shoppers to a hot breakfast.

A family with eight kids pushed a few carts around the Portage store, loading up on brightly-patterned winter jackets and snow pants.

When it was time to go to the toy section, the children, ranging up in age to ninth grade, dispersed. Once they found what they wanted, they skipped back to the cart with a collection, including Hatchimals, a Barbie cash register, a NERF gun and Baby Alive dolls.

After going through the checkout line, Amelia, 6, asked her sister Chloe, 5, how much fun she had.

Michelle Quinn is a freelance reporter for the Post-Tribune.

Road rage Road rage was reported at 8 p.m. Friday, Oct. 27 along Carmichael Road near Coulee Road. A man said a woman drove her vehicle past him at a high rate of speed and […]