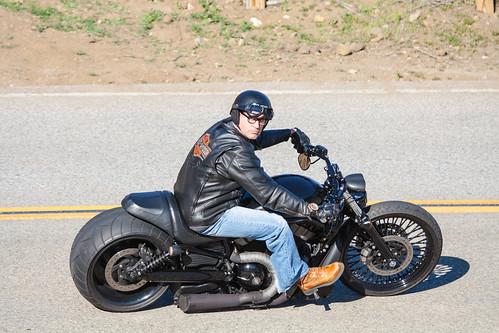 The Harley-Davidson VRSC (V-Twin Racing Street Custom) family of cruiser motorcycles was introduced in 2001 in a single model called the V-Rod. The V-Rod was developed by Harley-Davidson to compete against Japanese and American muscle bikes. The "V-Rod" made use of the Revolution engine, developed jointly with Porsche that, for the first time in Harley public production history, features overhead cams and liquid cooling. The V-Rod is visually distinct from other Harley-Davidson motorcycles. It can be easily identified by the 60-degree V-twin engine, the radiator and the hydroformed frame members that support the round-topped air cleaner cover. A distinct difference between the V-Rod and all other Harley production motorcycles is the location of the fuel tank. The fuel tank on the V-Rod is located underneath the seat, placing the rider on top of it, rather than the usual frontal placement. The "tank" in this case is simple dressing, hiding the frame. Loosely based on the VR-1000 superbike, it continues to be a platform around which Harley-Davidson builds drag-racing competition machines. All VRSC models are produced at Harley-Davidson’s Vehicle and Powertrain Operations facility in Blue Springs- Kansas City, Missouri.