With modern mechanicals, the Sportster S marks a tectonic shift for traditional Harley-Davidson motorcycles. Is it a step too far?

Harley-Davidson is in the process of reinventing itself, the resurgence kick-started with the Pan America 1250 two years ago, and now comes another brand new motorcycle which is of more relevance. The Sportster S.

Why do I say that? You see, as good as the Pan America is, it’s the first-ever ADV from Harley-Davidson, making it a totally different kind of gravy for traditional Harley riders. Think of it as McDonald’s trying to sell pizzas. There’s nothing wrong with offering new experiences to consumers, but do you ever go to McDonald’s looking for a thin crust instead of the Big Mac? Me neither!

Similarly, what a Harley aficionado wants is a custom-built cruiser with a thumping heart and hot-rod appeal. And that’s exactly what the new Sportster S promises. It shares its mechanicals with the Pan Am, but has the style and attitude of classic Harleys. Sounds perfect, no?

While the Harley Sportster nameplate has been around for over six decades, the American firm says the Sportster S marks an all-new direction for the manufacturer with its style, performance, and technology. Now, people can have differing opinions on its performance and technology – we’ll discuss these in detail in a bit – but you can’t possibly say the same about its design. Irrespective of your taste, the Sportster S looks bad to the bone, like a proper American hot-rod.

I’m no Harley fan, and cruisers aren’t my cup of tea, but I must say that I’m a sucker for this Sportser’s raw appeal. The side profile is my personal favourite – the beefy front-end, chunky tyres, flat-track style bars, short fender, slammed stance, and the way the V-Twin engine is stuffed into the chassis along with shotgun-type exhaust pipes – they all come together to make it look both stunning and sinister in equal measure. Fit-and-finish is impressive, and the attention to detail is immaculate – the chocolate satin finish on the magnesium engine covers looks delish!

The motorcycle weighs 228kgs, which makes it quite heavy. However, the seat height is 765mm, meaning it’s quite accessible for riders of all heights. The riding posture is cruiser-like, as you sit with your legs fully stretched out. However, the flat-track style bars will make you sit in a slightly crouched position, putting more weight on the front, which is quite comfortable for short riders.

In terms of tech and features, the Sportster S gets a new 4-inch round TFT display, which packs a raft of features and information. Features like cruise control, traction control, cornering ABS, and full LED headlamps are standard. I like the integration of the digital cluster, and it works well. What I don’t like is the number of controls and switches on the handlebar – it seems like overkill! Overall, though, there’s no denying that Harley has done a commendable job, for the Sportster S truly is a modern motorcycle with all the latest bells and whistles.

Propelling the Sportster S is the same Revolution Max V-Twin motor that powers the Pan America, although here it’s called the 1250T. The ‘T’ in the name represents more low-end torque. This is done by incorporating smaller valves and port dimensions, along with a different combustion chamber, to increase the airflow at low speeds. Harley says the engine provides up to 10% more torque between 3,000 and 6,000rpm. That said, the engine develops less power and torque than it does in the Pan Am at 121bhp and 125Nm, respectively.

Astonishingly, the first thing that takes you back is not the performance, but the refinement of the engine! There’s no potato-potato thump at idle, it hums and rumbles like a big Ducati twin. Move forward, and you’d again struggle to wrap your mind around the fact that it’s a Harley.

Despite being a heavy bruiser, the Sportster S is plenty quick. It picks up the pace quite ferociously – something I never expected from a Harley of this shape and size – and it loves to be revved. You can wring it right up to the 9,500rpm limit – in Harley circles, it would be called stratospheric! The only real downside is that the bike heats up quite a lot, especially when you’re stuck in traffic.

There are three riding modes – Sport, Road, and Rain – along with two custom modes, which allow you to choose between different settings for power delivery, engine braking, cornering ABS, and traction control. The default mode is Road, which works well for the most part, although the throttle response becomes a bit snatchy at low speeds. The Sport mode worked the best for me, as the engine delivers performance in an unrestricted and seamless manner here. It can sometimes be a little overwhelming, so you need to be careful with your throttle inputs.

Another niggle with the Sportster S is its gearbox. There’s no quick-shifter on offer, and the gear-lever has long and clunky throws. This problem can be somewhat solved by going for the optional mid-control pegs, though that may lead to a cramped riding position.

‘It’s got the soul and badassery of its forefathers, but it’s not mechanically stuck in the past like other Harleys’

If you like to judge a motorcycle’s performance or ride-and-handling from its on-paper specifications, you won’t find the Sportster S’ spec sheet particularly interesting. Its lazy rake and fat 160-section front tyre make it the stuff of nightmares around corners. On paper. Because that’s hardly the case when that fat contact patch meets the road. There’s no denying that you need a little more effort to turn this thing and that it never quite settles into a corner – it has a tendency of straightening up on its own. But, then, you also don’t have to bully the Sportster S into submission – it’s a rather predictable and stable handler, but it does take some time to get used to its peculiarities.

Now, while it feels a little heavy and cumbersome around bends at high speeds, it’s remarkable how agile and fun it is to ride in the city. Regardless of its lazy rake and long wheelbase, you can slice it through traffic with ease. Its wide bars give you great leverage, and you can exploit gaps without the bike feeling heavy or unwieldy. I even rode this behemoth like a maniac and enjoyed commuting on it every day.

Surprisingly, the Sportster S is equipped with a single 320mm brake disc upfront, featuring a radially-mounted four-piston calliper. Despite its single-disc setup, the braking performance is good; however, the lever could do with more feel and feedback.

In terms of comfort, the Sportster S is a mixed bag. On smooth open roads, it offers a velvety-smooth ride. But, this is India where bumps, potholes, and other road imperfections can appear out of nowhere. And that’s when you don’t find the ride to be pleasant anymore. With just 50mm of travel in the rear shock, sharp bumps send shockwaves up your spine, which, as you can imagine, isn’t a very nice feeling. So, if you’re riding over bad roads, be a little more mindful of your back.

I expected the Sportster S to be a step up from the previous model, but this is in a different dimension! It is still badass but doesn’t have the rusty, old-school, oil-soaked, potato-potato vibe to it. It is a thoroughly modernised Harley. It’s got the soul and badassery of its forefathers, but it’s not mechanically stuck in the past, like other Harleys. If you ask me, it’s easily the best Harley-Davidson I’ve ever ridden!

X-Factor: Badass and desirable, the Sportster S is a thoroughly modernised Harley. 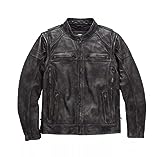