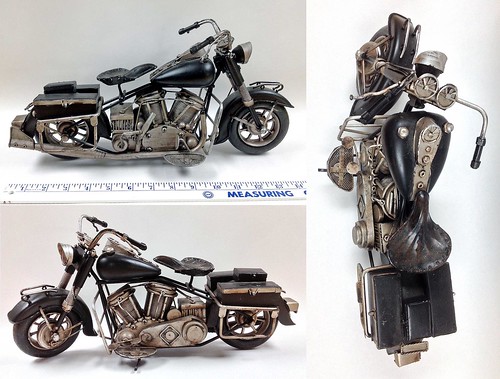 Any one know where I can purchase one of these, and what they cost? * Cast and hand crafted grunge metal Harley-Davidson flathead or panhead motorcycle * Approximately 15-inches/38-centimeters long x 6-in/15-cm wide x 7-in/18-cm high * Feels like it weighs 1.5-pounds/0.68-kilograms * A unique, all metal combination of castings, stampings, tube, domed nuts, Phillips head bolts, and hand formed flat strips & wire. Plus rubber? tires, old enough to be sticky, from a two piece mold. Pivoting front end and tires that rotate. Looks like your hands with be covered in grime and grease after you pick it up, but it’s clean. It’s a delight from any angle. No identifying markings * Purchased at that antique shed on the east side of Oberlin, (northeast) Ohio * Reminds me so much of the Harley-Davidson Servi-Car (three-wheeled utility motorcycle manufactured by H-D from 1932 to 1973) that I drove during a high school summer for Seat Cover Charlie in Indianapolis. Factory tow bar for auto back bumpers. Special left hand throttle & right tank shifter for chalk bagging the left rear tires of vehicles parked on the street in limited time zones, and returning later to ticket offenders. But, that’s a whole ‘nuther story * 2013 * iPhone 4s with PureShot camera app plus Photoshop Elements tweaks