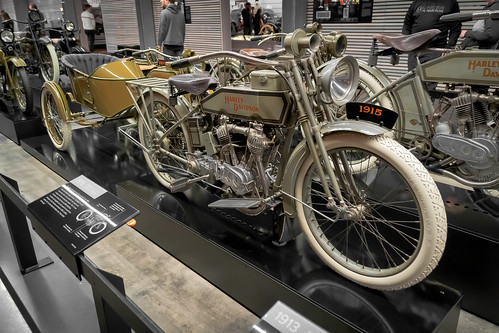 The Harley-Davidson Museum is a North American museum near downtown, Milwaukee, Wisconsin celebrating the more than 100-year history of Harley-Davidson motorcycles. The 130,000-square-foot (12,000 m²) three building complex on 20 acres (81,000 m²) along the Menomonee River bank contains more than 450 Harley-Davidson motorcycles and hundreds of thousands of artifacts from the Harley-Davidson Motor Company’s 110-year history. The museum attracts an estimated 300,000 visitors annually. The museum opened to the public on July 12, 2008, on a 20 acres (81,000 m²) site in the Menomonee Valley. The museum was built in an historically industrial area of Milwaukee. Prior to Harley-Davidson’s purchase of the land from the city, the site was formerly used by the Milwaukee Department of Public Works, Lakeshore Sand Company, and Morton Salt. A 4 feet (1.2 m) layer of imported soil was added to combat the contaminated soil. New vegetation was planted to restore the landscape to its riparian state. In late February 2006, designs for the museum were unveiled. The designs were created by James Biber, a partner at Pentagram, his team, and Michael Zweck-Bonner, an associate at Pentagram. Abbott Miller, a partner at Pentagram, designed the museum’s permanent exhibitions. The firm designed the museum over a period of eight years. On June 1, 2006, Harley-Davidson began the construction of the $75 million complex with a groundbreaking ceremony that included legendary Harley-Davidson dirt track motorcycle racer, Scott Parker, breaking ground by doing a burnout with a Harley-Davidson XL883R Sportster, instead of with the traditional golden shovel. The site includes parking spaces for 1,000 motorcycles and 500 cars. The Museum’s facade also features a 17-foot (5.2 m)-tall, steel Harley-Davidson sign. The museum’s galleries permanent exhibitions, spread throughout two floors, in addition to temporary exhibits and the motor company’s archives. The complex also includes a restaurant, café, retail shop, and special event spaces. Also on display are historic Harley-Davidson items that tell the company’s story and history, such as photographs, posters, advertisements, clothes, trophies, video footage of vintage and contemporary motorcycling, and interactive exhibits, including 10 motorcycles that visitors can sit on.

The Motorcycle Gallery
On the museum’s upper level, a procession of motorcycles is displayed down the center of the main hall, running the length of the building, with galleries on either side.

The Harley-Davidson Journey
Along the east side of the upstairs galleries, a series of interconnected galleries exhibit the Harley-Davidson’s chronological history. The galleries relate the company’s history from its origins in a 10×15-foot wooden shack to its current status as the top U.S. motorcycle manufacturer, producing more than 330,000 bikes each year. The centerpiece of the gallery is "Serial Number One", the oldest known Harley-Davidson in existence, which is encased in glass. The glass enclosure sits within a floor-embedded, illuminated outline of the backyard shed the motor company was founded in.

Clubs and Competition
The Clubs and Competition gallery includes displays and information about Harley-Davidson’s racing history. The gallery includes a section of a replica wooden board track, suspended in the air at a 45-degree incline. The wooden track features vintage video footage of actual board track races, and attached 1920s-era Harley-Davidson racing motorcycles; the bikes that raced on board tracks at 100 miles -per-hour. Fatalities were common, which led to the banning of wooden board tracks for motorcycle racing.

Custom Culture
The Custom Culture gallery covers Harley-Davidson’s impact on American and global culture. The centerpiece of the Custom Culture Gallery is "King Kong", a 13-foot (4.0 m)-long, two-engine Harley-Davidson motorcycle customized by Felix Predko. The exhibit also features exact replicas of the customized Harley-Davidson bikes ridden by Peter Fonda and Dennis Hopper in the 1969 American movie, "Easy Rider", including Fonda’s "Captain America" chopper and Hopper’s "Billy Bike". Two of each of the two choppers were created, and one "Captain America" was destroyed in the film’s production.