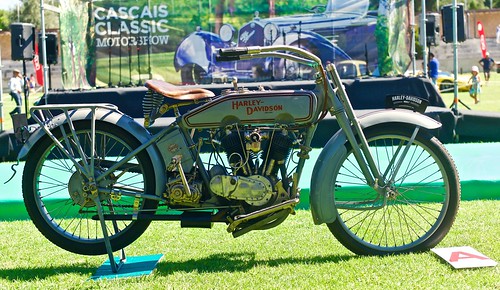 The 1915 Model 11-F was the best-selling Harley-Davidson up to that time, mainly because of the use of inexpensive acetylene lamps.

“Art of the Harley-Davidson Motorcycle” by Dain Gingerelli, with artful photography by David Blattel, is a handsome, informative overview of Harley-Davidson’s 100-plus years of style and innovation.

Historical and technical profiles written by Harley-Davidson expert Dain Gingerelli and masterful motorcycle photography by David Blattel come together in Art of the Harley-Davidson Motorcycle (Motorbooks, 2011). The result is a breathtaking review of over 100 stunning Harley-Davidson greatest hits from the early 1900s to today. The following excerpt is taken from Chapter 1, “Finding Form: The Early Harley Motorcycles.”
1915 Model 11-F

Like the Model 11-J, the Model 11-F used the upgraded 11-horsepower V-twin engine that Harley-Davidson improved for 1915.

The engine had a mechanically driven oil pump for more positive lubrication, a major improvement because it eliminated the need for the rider to work the hand pump that had been required to maintain pressure in the oil tank while riding. The mechanically driven pump did all the work, and did it in a more reliable way.

Even though the 11-F’s engine had this new feature, the bike qualified as the poor man’s Harley of the time because it lacked the new electrical system found on the 11-J. Using the old acetylene-burning lights saved 11-F owners $35 compared to the 11-J’s MSRP, a hefty sum in 1915.

Obviously the savings was worth it to customers, because the 11-F topped all other Harley models for the year, making it the best-selling Harley up to that time. The new engine also proved popular for racing, and Harley-Davidson offered a race model with the new engine for customers wanting to compete on dirt ovals and board tracks that were popular at the time.