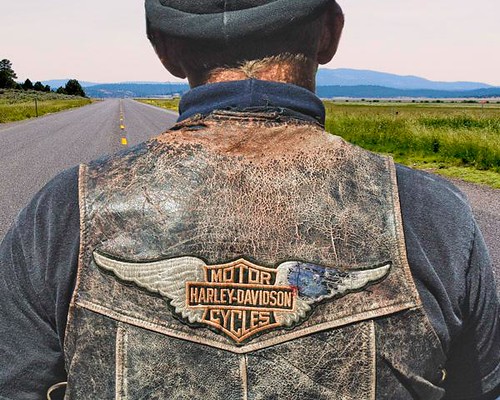 If you like to order prints go to www.roadsidegallery.com/store/catalog/assorted/-/harley-d…

A fine art photograph of a Harley Davidson Vest on a biker. Ride helmet free with the wind and bugs in your face. High on a Hog, a Harley Davidson motorcycle, that is. This Harley or HD patch represents a certain life style, for some it is only the week ends, then back to the shirt and tie on Mondays. For others it is definitely a way of life. It seems that the true bikers, who are totally amerced, in the Harley culture are often missing teeth, usually the front ones. Why? It is believed that dental care would interfere with the cost of caring for their bike, so some things must be put aside. The founders of the Harley Davidson Company, however, did keep all of their teeth. In 1901 William S. Harley at age 21 drew up plans for a 116 cc engine that would power a pedal bicycle. His friend, Arthur Davidson, helped William with his hopeful plans, but after two years they found that this small engine simply would not carry a person of modest weight over Milwaukee’s gentlest hills. They, wisely, chalked up all of their efforts to a ‘valuable learning experience.’ In their second try they created an engine of 405 ccs with the guidance of their friend Ole Evinrude, who was pioneering out board motors for boats. Harley and Davidson left the idea of a bicycle behind and came up with a much more streamlined bike with a loop framed design. Their prototype was ready for unveiling on September 8, 1904 when it competed in a Milwaukee motorcycle race which was held at the State Fair Park. This was the first documented Harley Davidson to ride in the wind. It was ridden by Edward Hildebrand, sadly it came in fourth place. With much added hours of experimentation and expense Harley and Davidson perfected their motorcycle and created a world renown product that stands for speed and quality to this day.