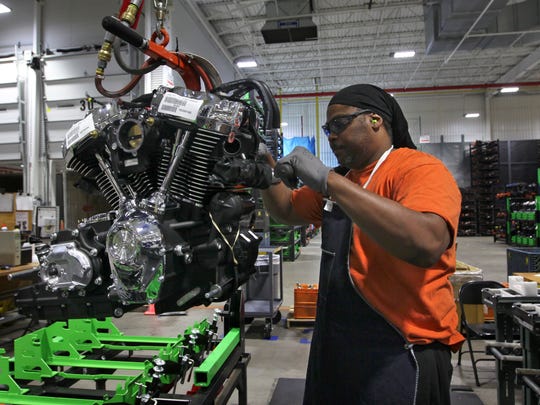 Days before Harley-Davidson’s union contract at its Wisconsin factories expires, there’s still no agreement, and some employees at the Menomonee Falls plant have staged protests.

A Harley spokeswoman said that the company was in negotiations with the union but had no further comment.

Union officials were not immediately available for comment Wednesday, but some employees said they’ve taken their meal breaks to protest outside the plant, worried about possible layoffs and not having a proposed contract to vote on.

The current agreement with United Steelworkers of America Local 2-209 was ratified by workers at the Menomonee Falls and Tomahawk plants in 2010 and implemented in 2012.

The deal included a seven-year wage freeze, with the possibility of pay raises, and higher health-care expenses. It also called for the use of seasonal, or “casual,” employees who would not be entitled to medical or retirement benefits and would receive less pay for the same work done by regular, full-time employees.

In 2010, Keith Wandell, then the company’s CEO, urged employees to approve the deal, telling them in a letter that it was up to them to decide whether they wanted to remain part of the company’s future.

But while Wandell’s offer increased the likelihood that the company would keep its Wisconsin manufacturing operations, it provided no guarantees.

Harley has since eliminated hundreds of manufacturing jobs at its U.S. plants, and in 2018 announced the closure of its assembly plant in Kansas City. The company also opened a plant in Thailand to build bikes for the Asian and European markets.

The world’s largest manufacturer of heavyweight motorcycles said it was closing the Kansas City factory despite pleas from some members of Congress to keep it open and retain about 800 jobs. The company also said it was creating 400 jobs at its York, Pa., plant.

April 23, Harley is scheduled to announce the results of its first quarter of 2019. Earlier, the company said it expected to ship between 217,000 and 222,000 bikes this year, the lowest in eight years as the motorcycle industry remains stuck in low gear.

Thank you! You’re almost signed up for Business Watch Delivered

Keep an eye out for an email to confirm your newsletter registration.

RELATED: Harley-Davidson US motorcycle sales tumble as it looks to electric bikes

Harley has struggled to reverse a prolonged slide in sales, with growth overseas somewhat helping offset a decline in the U.S. bike market.

Detailed information and review of the Harley-Davidson Street 750 & 500 motorcycles. Matt Laidlaw gives him in-depth analysis of the performance, handling, … source