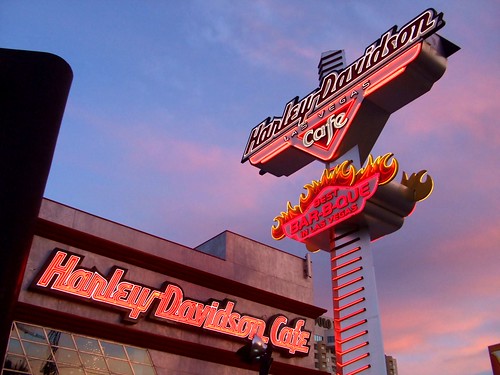 The Harley Davidson Cafe is more than just a really cool eatery that serves up smoking BBQ yummies! The cafe features the heaviest flag in the world, made out of chains weighing 7 tons, measuring 25ft. tall and 37ft.8in. long. The chain flag is recorded in the Guinness Book of World Records and is made out of 201 lengths of chain from 44,000 individual chain links. You can get a bird’s-eye view of over 15 custom motorcycles on display in the Cafe, including motorcycles from Billy Joel, Elvis, and Ann Margaret. Another cool attraction is a conveyor belt system that circulates throughout the 3 levels of the Cafe with seven classic Harley Davidson motorbikes traveling the system. The conveyor belt system was built by the same person who built the conveyor belt assembly system used in the Harley Davidson Motorcycle plant in York, PA. You can walk the Cafe and check out the many glass display cases displaying items like Jon Bon Jovi’s snakeskin jacket designed by Gianni Versace. Don’t forget to swing by the Harley Davidson retail store on your way out to pick up a souvenir!