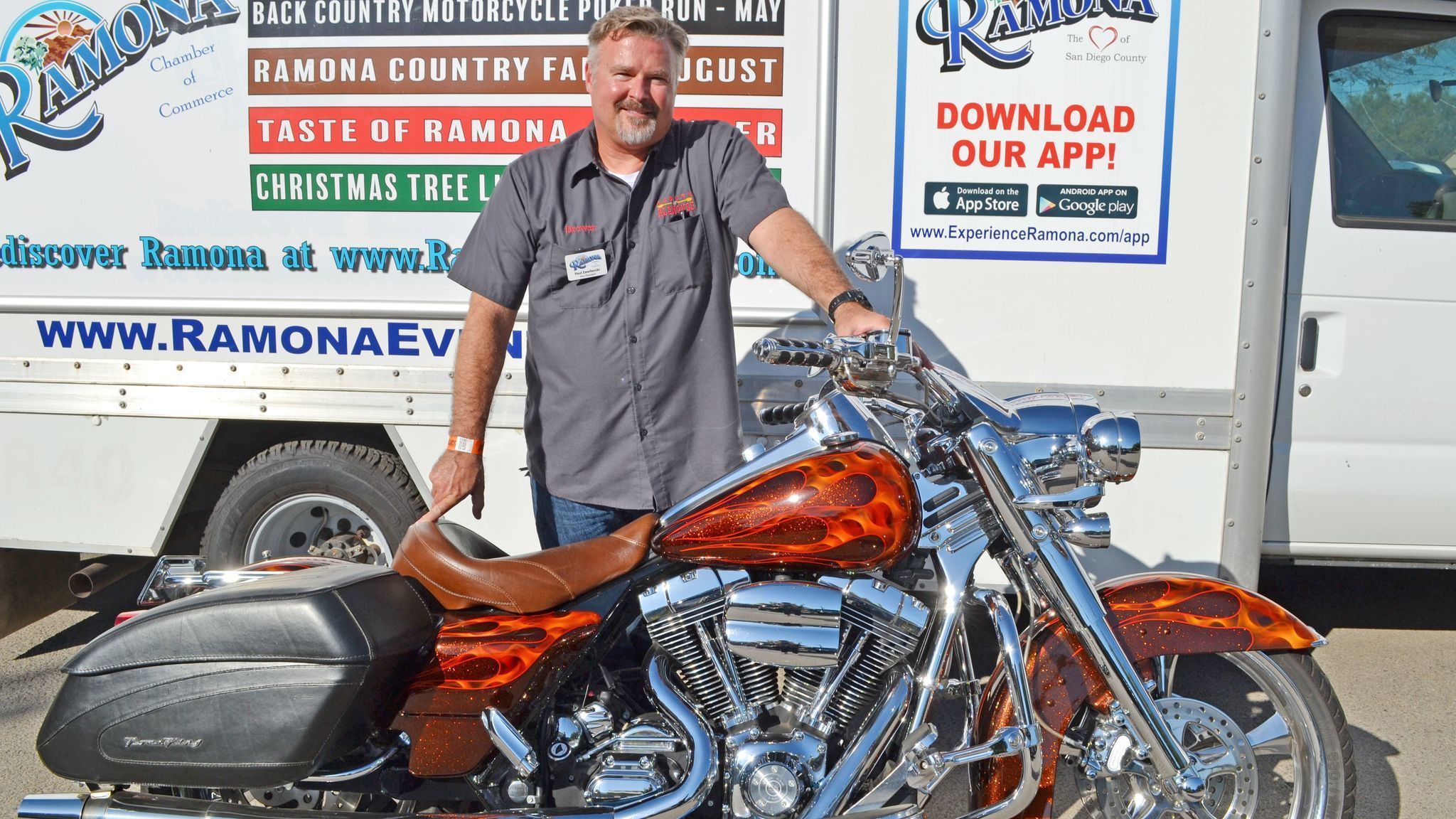 By day, Paul Zawilenski can be found in a suit and tie sitting at a desk, but at night or on the weekends he could be cruising along on a backcountry road on one of his motorcycles.

“I always joke with clients here that ‘you’re not going to recognize me outside the office,’” said Zawilenski, vice president and Chase private client adviser with J.P. Morgan.

He is also vice president of the Ramona Chamber of Commerce board of directors. Combining his business experience with his zest for riding motorcycles, Zawilenski is organizing the second annual Custom Bike Show for the Ramona Country Fair.

The show is scheduled from 9 a.m. to noon on Sunday at the fairgrounds.

Last year’s Custom Bike Show drew about 30 participants and this year Zawilenski is hoping to at least double that amount.

There will be different classes for motorcycles, including stock, custom, vintage, and chopper, and there will be prizes.

The idea for the show came from watching people constantly riding motorcycles through town. Zawilenski said he wanted to give them a reason to stop, have breakfast at one of the restaurants, and park their bikes and see the fair.

Zawilenski has seen the success of bike shows in other parts of the country. He has ridden to the Sturgis Motorcycle Rally in Sturgis, S.D. The small town attracts people from all over the world for the rally, which just marked its 77th year.

A 22-year resident of Ramona, Zawilenski is originally a Midwesterner.

“I moved out to Southern California from Chicago to be by the beach,” he said.

Growing up he lived in a Chicago suburb, but his family had a farm in a small town in central Wisconsin where they often vacationed.

“As a kid I was riding little mini bikes and mini cycles up in Wisconsin and just kept that passion,” he said.

Zawilenski said when he saw Ramona, “it reminded me so much of that small town.”

“I got one of the first ones,” he said of the Yamaha.

Here there are so many different types of riding — some people like to ride their motorcycles in the sand in the desert or race Motocross, or ride on the street — he noted.

On weekends, that could be riding through the backcountry and the “quiet mountain roads,” perhaps through Julian and down to Borrego Springs, or through Warner Springs and on to Palm Springs for lunch.

While he likes the freedom of riding by himself, he sometimes rides with groups and said it’s easy to strike up conversations with other bikers.

His wife, Susan Wilson, who grew up in the San Diego area, also likes to ride, but as an equestrian and shows horses competitively.

“That’s how we balance each other out. She’s got horses, I’ve got motorcycles, so it’s perfect,” he said.

Zawilenski, who is also chair of the Ramona Community Foundation, has plans for more events. Earlier this year he organized a backcountry poker run, and on the last Thursday of the month he invites bikers to the Ramona American Graffiti Cruise Night. He is also working on a big family-friendly event for the first weekend in November with Twisted Throttle, Barona Drag Strip races and IV League flat track races.

“We’ve got professional racers out here — adults and children,” he said.

SUNDAY Owl’s Eye Vineyard and Winery live music: 2 to 4 p.m., 1414 Metcalf Road, Shelby, featuring Bob Stephens. He started touring at the age of 15 with a gospel group known as the Brooklyn All-Stars. A pianist, […]