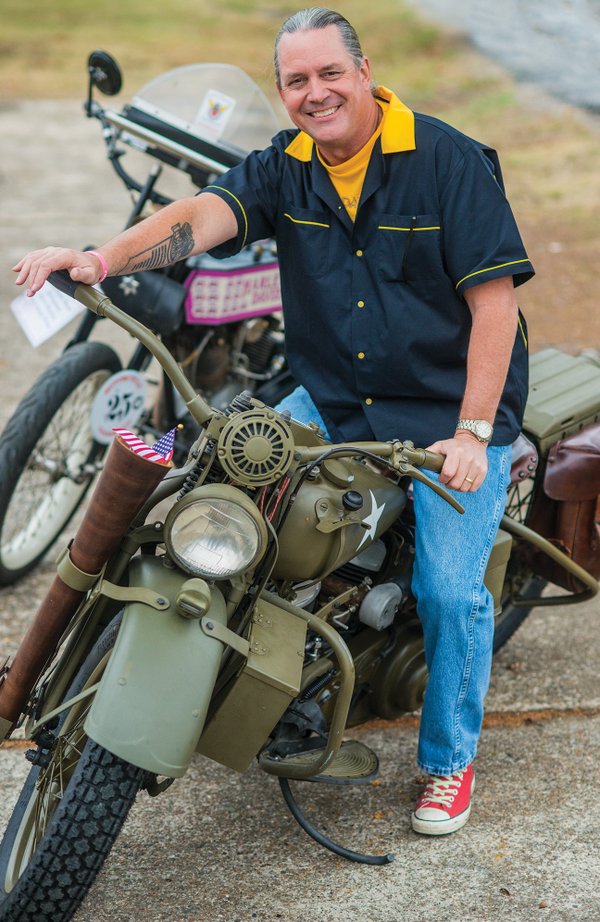 An initial visit to Dr. Scott Byrd’s office in downtown Arkadelphia shows several things about him — he is a dentist, a Harley-Davidson-motorcycle enthusiast, a hunter and a sports fan.

Byrd is also involved in the community.

“As a volunteer leader in Arkadelphia, we just can’t thank Dr. Scott Byrd enough,” said Shelley Loe, executive vice president of the Arkadelphia Regional Economic Development Alliance and Area Chamber of Commerce. “His service on the Arkadelphia City Board continues to be valuable, and he is always a phone call away for the Chamber of Commerce. When I call with an idea for events or just need to run an idea by him, he is there.”

Byrd, 55, said he always wanted a motorcycle growing up.

“When I was a kid, another kid in the neighborhood had a mini-bike,” Byrd said. “I thought it was great and took a ride on it.

“I came home bragging about riding it … and I got a whooping,” Byrd said, laughing.

Today, Byrd has more than 10 motorcycles, both modern and antique, many of which are more than 35 years old.

Byrd was born in Nuremberg, Germany, a son of Wencie Byrd, who now lives in Hot Springs Village, and the late Jim Byrd.

“I only lived in Germany for a few months as a baby but returned later when I was in the Army,” he said. “I am a military brat and a preacher’s kid as well. I have lived in Arkansas, Louisiana, Oklahoma and Texas. My dad was a Southern Baptist preacher.”

Byrd graduated from high school in Pineville, Louisiana, in 1980, and came to Arkadelphia to attend college.

“I attended Ouachita on a ROTC scholarship and graduated in 1984 as a commissioned officer (second lieutenant) in the Army,” he said. “My dad graduated from the same program. My mom pinned one of my dad’s butterbars (rank insignia) on one side of my uniform, and my wife pinned one on the other side. It was pretty neat.”

Byrd graduated from the Louisiana State University School of Dentistry in New Orleans in 1989 and began his service in the Army. He served a one-year dental residency in Colorado while he was stationed at Fort Carson. From there, he was sent to Germany, where he spent three years. He returned stateside, serving one year at Fort Sam Houston in San Antonio, Texas, and two years at Fort Sill in Lawton, Oklahoma.

“I came back to Arkadelphia in 1996 and bought this dental practice. I have been here 21 years,” Byrd said.

“I’ll be working the rest of my life,” he said, smiling. “I have to work to support my habit — motorcycles. I am on track to retire at 92. … That’s my retirement plan.”

Byrd said he seriously became interested in motorcycles in the 1980s, “although I did have a couple of bikes while I was in college,” he said.

“My brother-in-law got me interested in Harleys,” Byrd said.

“When I was in the Army, there was an auto-sales program offered through the PX (post exchange). I could buy a Harley through the PX and save a lot of money,” he said.

“I did it while I was overseas … after much discussion with my wife,” he said, laughing.

“I bought it and picked it up in Longview, Texas, when I returned to the United States. It was a 1993 Harley-Davidson Superglide. Within six months, I traded it in on a bigger bike — a Harley-Davidson Dresser, which is for traveling long distances,” Byrd said.

“Modern bikes were great. I’ve had a lot of great adventures with them,” he said.

“But I developed an interest in older bikes. About 15 years ago, I bought my first antique motorcycle off eBay, sight unseen except what was shown online,” Byrd said.

“As it got closer to midnight, when the auction was set to close, I came down here to the office because the computer was faster. I got it,” he said.

“I was lucky. The guy selling it had no clue what it really was,” Byrd said. “It was a Harley-Davidson 1929 D with a 45-cubic-inch motor; it is a forerunner of the Sportster.

“It has a very low VIN (vehicle identification number). It’s a very important bike in the history of Harley-Davidson. I worked years getting it restored to its original condition.”

After buying the 1929 bike, Byrd quickly joined the Antique Motorcycle Association of America. He is a member of the Diamond Chapter in Hot Springs and also participates in events with the Heritage Chapter in Little Rock.

“Ninety-three bikes left the Atlantic City Boardwalk, and 16 arrived in Carlsbad with a perfect score, which meant they rode every single mile and had no penalty points,” Byrd said. “My goal was to have a perfect score. … I did. I knew there was no way I could win unless everybody ran off a cliff. … I just wanted to get there. I had made several modern upgrades to my bike to ensure I got there. I think I came in 13th or 14th place.

“I raised money for breast-cancer research for that run and donated approximately $ 4,000 to CARTI.”

“That bike fought me every day,” he said laughing.

“The Motorcycle Cannonball Run is consistently the most demanding ride there is,” he said. “There are always 10 to 12 countries represented, 10 to 15 different brands of bikes. I’ve made friends with people all over the world.”

The Motorcycle Cannonball Run is held every two years. The next one will be in 2018. Byrd will participate, but not as a rider.

Byrd plans to ride with five or six other riders in January 2019 to note the 75th anniversary of D-Day.

“We will be on military motorcycles,” he said. “I will ride my 1942 Harley-Davidson WLA, which has that smaller engine, 45 cubic inches. We will ship the bikes to England, then cross the English Channel and ride to Normandy and on into Berlin, stopping at historic places. We are going on our own, … not with an organized group. We are being real selective as to who goes with us, trying to make sure everybody meshes well together.”

Even though Byrd has several antique motorcycles, he still rides his modern bike as much as he can. His current modern motorcycle is a 2003 Harley-Davidson 100th Anniversary Edition.

He said he does ride his older bikes “right around here and back home again.”

“We just recently held a motorcycle show at Arktoberfest in Arkadelphia,” he said. “It went very well. We had about 25 bikes. We plan to have the show again at Arktoberfest 2018.”

“I am into my third term and have served as assistant mayor for about a year,” he said, adding that he does not plan to seek office again; his term ends Dec. 31, 2020. “I am doing my civic duty, but I have no desire to get into politics any further.”