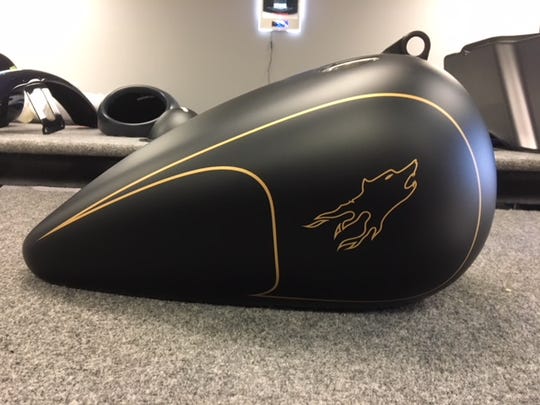 A stylized wolf head is featured on the fuel tank for the rebuilt and customized motorcycle students in the Algoma Wolf Tech program at Algoma High School are building for the Biker Build Off contest at the Northeast Wisconsin Motorama. (Photo: Courtesy Matt Abel)

Under the school’s Algoma Wolf Tech program and direction of technology education teacher Matt Abel, the students are stripping down and rebuilding a customized 1999 Harley-Davidson Softail motorcycle for the first-ever Biker Build Off at the Northeast Wisconsin Motorama car show, March 29-31 in Ashwaubenon.

The Build Off is a contest between groups from four state high schools, with judging based on the bikes’ drivability, looks, and the effort the teams put into updating their work on social media (every team has a Facebook page), as well as the popular vote by NEW Motorama visitors.

More than just pride is on the line — the winning team, which will be announced the Sunday of the show, earns a full set of Matco tools and a rolling Matco toolbox that Abel estimated is worth at least $8,000.

The other schools are Freedom, whose “Two Wheels to Freedom” team is customizing a 1998 H-D Sportster; Northeastern Wisconsin Lutheran in Green Bay, with an ’86 BMW; and Oak Creek, whose Knights Racing team is entering a ’72 Honda CB175 dirt bike.

Brooke Petersen, a senior at Algoma High School, and technology education teacher Matt Abel work on the rear frame assembly of the motorcycle for the school’s Biker Build Off project for the Northeast Wisconsin Motorama. (Photo: Christopher Clough/USA TODAY NETWORK-Wisconsin)

Abel said there are no restrictions governing the make of the bike or what the schools can do to it, as long as the work stays within a $5,000 budget not counting the cost of the bike.

The Algoma bike will have a black powder-coat finish from PFS Powder Coatings in Luxemburg, with a few chrome pieces added on and gold trim painted by Custom Painted Vehicles Inc. of Franksville, just south of Milwaukee.

The gold — a stylized wolf head on the fuel tank (Algoma sports teams are called the Wolves) and striping down the rear fender — is the only paint that will be on the finished product. Yes, the bike will be a bare-bones custom job, but that can appeal to those who prefer simplicity.

When finished, the Algoma High School bike will have a simple black powder coat accented with gold highlights. This is the rear fender. (Photo: Courtesy Matt Abel)

“We’re just modifying the front end, building on the motor a little bit,” Abel said. “We’re not specialized here, so we’re not changing the frame or anything like that. It’s mainly cosmetic, so it doesn’t look 100 percent like a Harley Softail … It’s stripped down as much as possible to just be road-legal.”

“Half of the parts we took off aren’t going back on,” junior McKale Krueger said, standing in front of shelving full of those disassembled parts.

The wheels started rolling when NEW Motorama organizer and promoter Rick Paulick called Algoma Principal Nick Cochart in late 2018, saying one of the schools originally entered had dropped out and he had room for another to join, Abel said.

Abel was interested, but he had to find a bike to rebuild in a limited amount of time. Fortunately, one was available.

“It so happened Vandervest Harley-Davidson (the Green Bay-area dealer) had a bike they were going to build,” Abel said. “In turn, they allowed us to build it.”

About seven students are consistently working on the bike, with a couple others pitching in occasionally. Because it is a club program, the students don’t need to be enrolled in a specific class to participate, although they can work on it during the school day and earn credits.

The project is getting help and guidance from a few members of the public and especially volunteer mechanics from Vandervest, which Abel said has been something of a partner in the effort, but the bike will reflect the students’ choices and work.

“All the ideas came from us,” Abel said. “I gave (the students) design choices, and they chose how it will work. As a group, they decided the paint; they got a book and picked out bolt-on parts; they’ve been making parts runs.”

“We’ve been working hard, tearing it apart, rebuilding and redesigning it,” senior Gaven Jones said. “When you pick the parts out of a catalog, you think what’s going to make it look cool, look good.”

Student members cited various reasons for joining the project. Jones said he always wanted to have his own bike, while Krueger and senior Brooke Petersen said they became more interested in bikes once work started.

“It was a new thing you don’t usually get the opportunity to do,” Krueger said. “(I was) not really into bikes until we got into it.”

“I think I was interested when (the bike) was brought in,” Petersen said. “Then, after we started the first day, I really wanted to tear it apart.”

Catching up to the competition

Abel said the budget isn’t coming from school district funds but instead from Wolf Tech, which is located at the school but operates as a student business, with middle and high school students learning to fabricate items in a variety of materials and marketing them to the public. He said he expected the bike would use most or all of the $5,000 cost cap.

Besides the funds from Wolf Tech, the bike build gets help from sponsors who’ve donated products, labor and guidance. Along with Vandervest, PFS and Custom Painted Vehicles, they range from Tucker Powersports of Texas, which set up donations of parts from a number of manufacturers, to Mrs. Wigglebottoms Print Factory of Casco, which supplied the team with T-shirts.

Abel admitted the Algoma team perhaps is running a little behind the competition because he learned about the contest late and didn’t get the donor bike until almost the end of 2018. Then, there were the numerous weather-related school cancellations this winter.

“Now it’s crunch time,” Abel said. Last Saturday, March 9, was the first chance the team had to work on it outside of normal school hours.

The school doesn’t have an auto shop or small-engine repair program or classes that would relate to this project. Abel said the school recently relaunched an automobile upkeep class, but that just covers basic maintenance.

Meanwhile, Freedom has a student auto club that built up a 1985 Toyota 4Runner and displayed it at the 2018 SEMA (Specialty Equipment Market Association) Show in Las Vegas, the largest automotive trade show in the world, and is building a Chevy pickup for the next SEMA show in November. And the Oak Creek team is building and racing a flat-track (short dirt oval) bike as part of the BUILD program for Milwaukee-area schools.

Algoma High School senior Gaven Jones and junior McKale Krueger contemplate the parts stripped off the donor motorcycle, a 1999 Harley-Davidson Softail, for the school’s Biker Build Off project for the Northeast Wisconsin Motorama. Not all of the parts are going back on the customized bike. (Photo: Christopher Clough/USA TODAY NETWORK-Wisconsin)

No matter whether the Algoma bike wins the contest, it has a likely future as someone’s street cruiser or show bike. It will be raffled off at the annual Jerry Parins Cruise for Cancer motorcycle ride in Green Bay this June; proceeds will be split between Wolf Tech for future bike builds and local cancer organizations supported by the ride.

More importantly, the project gives Abel the chance to teach special skills to the students. Not just mechanical and fabrication skills, but also experience with organization and deadlines, as with other Wolf Tech projects, he said.

“It’s just that these are real-life programs,” Abel said. “We’ve extended the classroom outside, got kids excited about these programs. It might lead to a career you never would know about.”

Abel said he hopes the contest returns next year and the school is invited to enter, given that he’ll have a year’s experience under his belt for the new bike. At least one of the participating students said he’d return as well.

“There are a lot more things we can do here with fabrication (of parts and bodywork). And more time,” Abel said.

The fifth annual Northeast Wisconsin Motorama is open from 3 to 10 p.m. March 29, 10 a.m. to 9 p.m. March 30 and 10 a.m. to 5 p.m. March 31 at Brown County Arena and Shopko Hall, 1901 S. Oneida St., Ashwaubenon. Algoma High School is taking part in the custom Biker Build Off contest against three other high schools. For updates on the project or more information, visit the “Algoma Bike Build Off” Facebook page.

Tickets are $10 for adults before March 29, $12 at the door, $20 for a weekend pass, $6 ages 5 to 12; parking is $7 in the Lambeau Field lot across the street from the arena. The show features cars, motorcycles, other motor vehicles, displays by local race tracks, an airbrush and pinstriping showcase, a metal shaping showcase, special equipment vendors and a model car show.