Big on style, big on muscle and a presence on road unlike any other. There’s hardly any company that does it better than Harley-Davidson. And, if you have a budget of about Rs 10 lakh and want a cruiser motorcycle that comes with a big brawny engine, the Harley-Davidson 1200 Custom becomes the obvious choice. It looks the part of a proper cruiser, carries a badge on its tank that you can boast about and, as the name suggests, it is powered by a 1200cc engine.

But how does the 1200 Custom manage to pack all that in such a price bracket? Does it cut corners or give great value for money? Let’s find out.

Well, let’s begin with what gives this motorcycle its remarkable presence on road – the design. The first thing that will catch your attention is the big, in-your-face front-end design of the 1200 Custom. That is courtesy the chrome finish that the bike sports at the front. The wheel, the suspension, the handlebar and especially the part that lies on top of the headlamp – everything makes the motorcycle a looker. Taking the story forward is the 16-inch five spoke alloy wheels which wear the Michelin Scorcher tyres. Then, there’s the classic round headlamp shape as the cherry on the cake. The muscular design language is carried on even you look at the motorcycle from the sides thanks to the dual exhausts and all the chrome that lies around it. From the back, the 1200 Custom gets big 150 section rear tyre and the LED light unit keeps the approach minimalistic and brawny. Overall, there’s no denying that the 1200 Custom is an attractive looking motorcycle that carries a muscular stance and that’s something that a lot of people would appreciate. 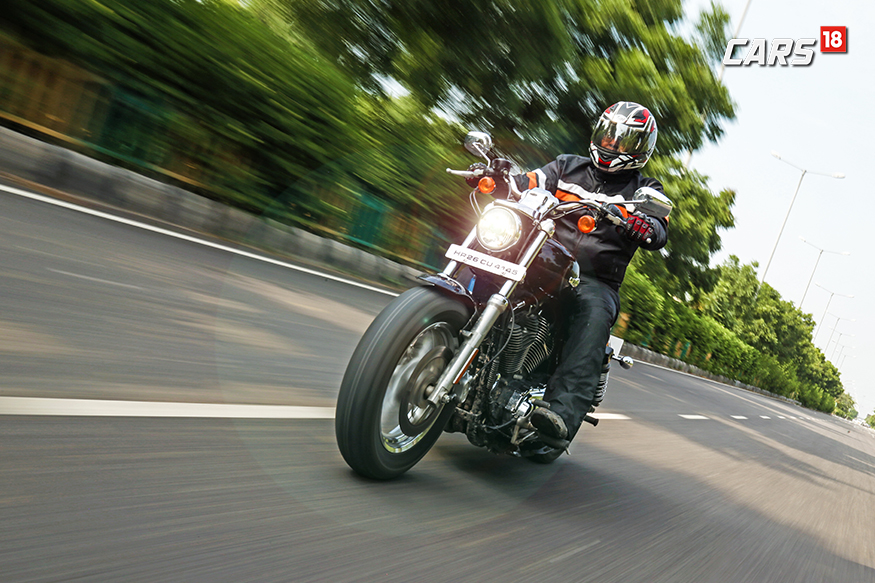 Once you hop on the bike, you are greeted by a round-shaped instrument cluster that gives you the classic roadster/cruiser feel. It does have space for a small digital readout which shows the necessary information you need, like, the engine RPM, clock and dual trip meters as well. Also, the handlebar mounted indicators look and feel fantastic.

The next aspect that one would appreciate about this Harley is the heart of the 1200 Custom, which is the engine. The unit is a 1,200cc V-Twin engine, called by Harley-Davidson as Evolution, and is capable of pushing out an impressive 96 Nm of torque. Harley-Davidson doesn’t put out horsepower figures of their motorcycles so we can’t tell you the exact number that is claimed by them but rest assured, it does feel like a proper 75 horsepower machine at your disposal. Interestingly, the engine’s sweet spot lies comparatively higher up in the RPM range, which is, post 3500 RPM. Don’t get us wrong, though, as the engine has ample torque even lower down in the RPM band but at that point, there are vibrations on the handlebar and the foot pegs and they are strong enough to make you shift down which means you would stay in the meat of the power anyways. Post 3000 RPM, the engine is oh-so-smooth making the motorcycle such a pleasant affair while riding. Yes, the gearbox mated to the engine is a 5-speed setup but the gear ratios are so well laid out, that you will not miss the sixth gear in any riding scenario.

The instrument cluster of the Harley-Davidson 1200 Custom. (Photo: Ayushmann Chawla/News18.com)

And let’s not forget, the 1200 Custom is a machine that’s made for the highway cruising and when you show it long open roads, the ride quality is nothing short of sublime.

To test its highway capabilities, we rode the 1200 Custom all the way from Delhi to Jaipur and back to Delhi – one of the best highways to take on from Delhi. During our trip that spanned over 650 kilometres, the bike gave us no chances of complaints whatsoever. This also allowed us to better understand another major positive about the bike – the riding position. The handlebars sweep back towards the rider by just the right amount, the foot pegs are front set and the seat is wide and low. What this means is that no matter how long you ride for, the rider’s feet, wrists, shoulders, back and neck, all will be fine. Add to that the 17-litre fuel tank and you have a highway muncher at your hands. 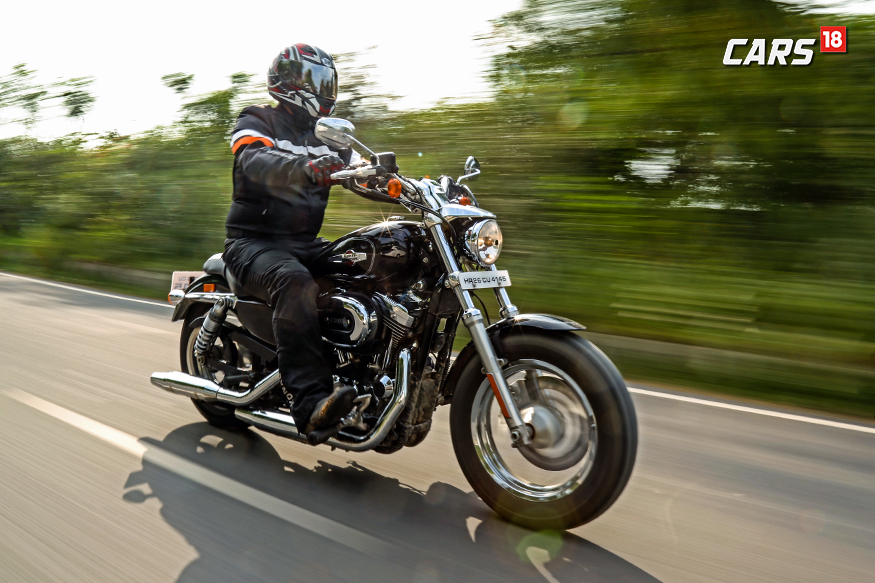 What’s Not So Cool?

Once we were back in the city, the only let down was how the suspension behaved. They felt too soft, especially at the front, and you have to more considerate while going over potholes than you should be.

And, if we really nitpick, then the heat management of the bike failed to impress in city traffic. Being an air-cooled 1200cc engine in traffic sounds exactly like how it is, terrible. And on top of that, there is no ABS to keep the bike in check, especially those large 300mm discs which have great bite. All of this combined makes you a bit too concerned in the city and comes in the way of enjoying the motorcycle on road. 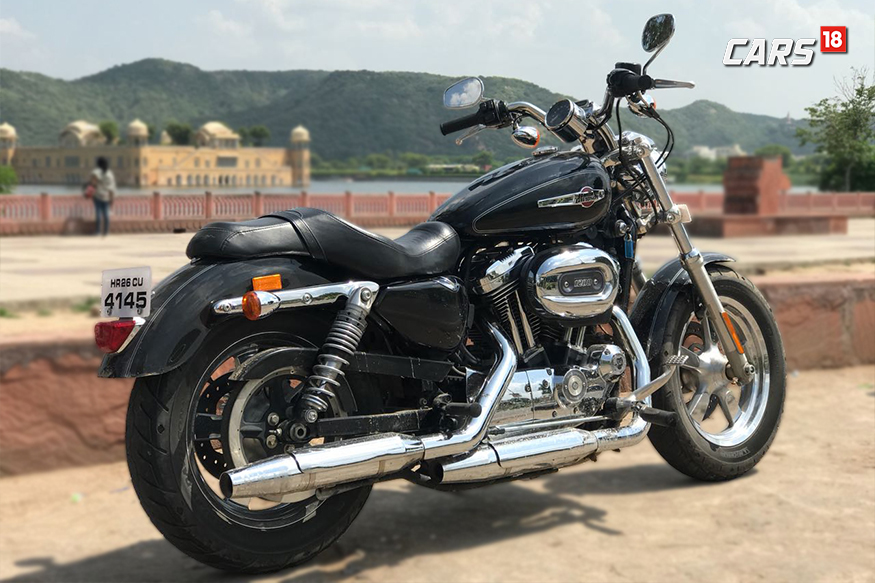 2017 Harley-Davidson 1200 Custom gets dual exhausts which give it a brawny character. (Photo: Ayushmann Chawla/News18.com)

Once you get used to all these factors, the Harley-Davidson 1200 Custom makes sense mostly for highway riding and when you stick to that, you will have nothing but smiles under your helmet along with the iconic Harley-Davidson rumble giving you company as you clock those kilometres.

So at the end of the day, the Harley-Davidson 1200 Custom is clearly built with a specific purpose in mind. What you are getting for your money is an absolute gem of an engine and a motorcycle that promises great touring ability and is perfect for those early morning rides and weekend getaways as well.

The only thing you need to watch out for is whether this kind of a motorcycling is in tune with your riding requirements or not. Because if they are, then you simply cannot miss out on the Harley-Davidson 1200 Custom. 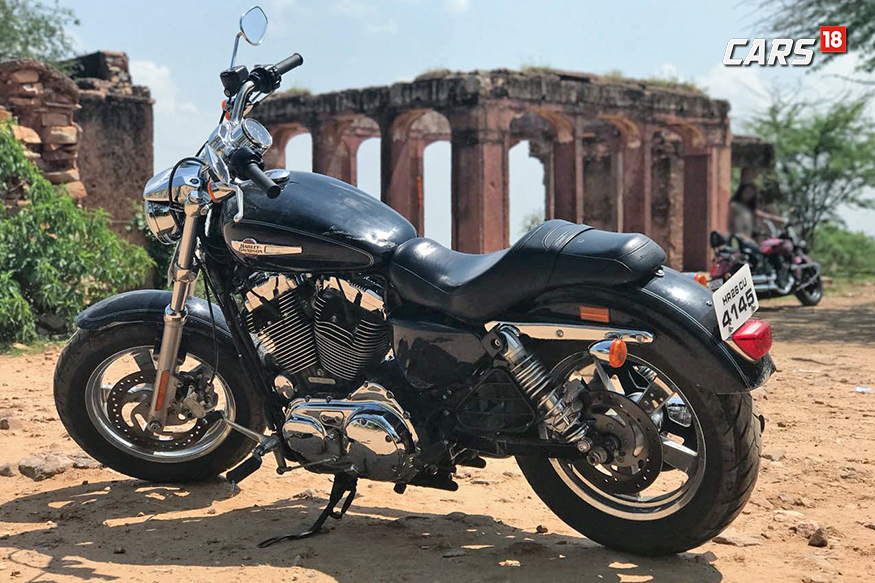 Renowned American bike maker Harley-Davidson has taken the wraps off two new motorcycles that go by the name Iron 1200 and Forty-Eight Special. Positioned in the company’s Sportster range, the two motorcycles get a new […]