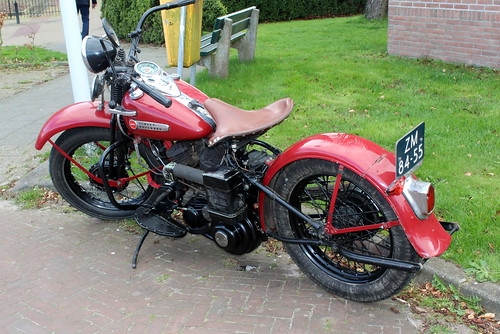 The Harley-Davidson WLA is a Harley-Davidson motorcycle that was produced to US Army specifications in the years during and around World War II. It was based on an existing civilian model, the WL, and is of the 45 solo type, so called due to its 45-cubic-inch (740 cm3) engine displacement and single-rider design.

The model number breaks down as follows:
W : the W family of motorcycles. Harley-Davidson (except in very early models) gives a letter designation for each model family. The W series at the time was the newest incarnation of the 45-cubic-inch (740 cm3) flathead motor, and was developed from the earlier R family 1932–1936.
L : "high compression", in the usual HD scheme. The "low compression" W model was only briefly available.
A : Army. The company would also produce a model to the slightly different specifications of the Canadian Army, which would be named the WLC. The WLCs differed from WLAs chiefly in the use of some heavier components, usually Big Twin parts, as well as Canadian blackout lighting.

Harley-Davidson began producing the WLA in small numbers in 1940, as part of a general military expansion. The later entry of the United States into World War II saw significantly increased production, with over 90,000 being produced during the war (along with spare parts the equivalent of many more). Unusually, all the WLAs produced after Pearl Harbor, regardless of the actual year, would be given serial numbers indicating 1942 production. Thus, war-time machines would come to be known as 42WLAs. Many WLAs would be shipped to allies under the Lend-Lease program. The largest recipient was the Soviet Union, which was sold over 30,000 WLAs.

Production of the WLA would cease after the war, but would be revived for the Korean War during the years 1949–1952.