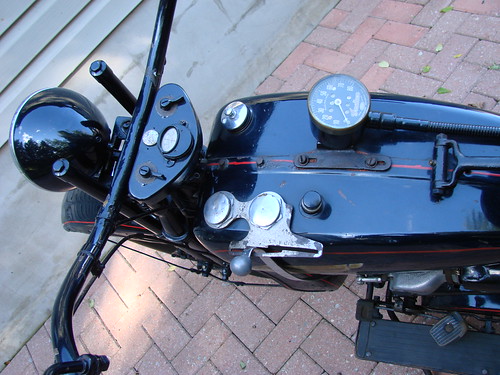 1929 Harley Davidson JD For Sale
First introduced 1n 1915, the “J” Series motorcycles produced by Harley Davidson were designed to not only compete with European, and American motorcycle manufacturers; they were designed to put Harley Davidson at the top of the motorcycling world. Development of the “J” Series bikes culminated with the release of the JD in 1929. This bike quickly set the standard for performance with over 20 horse power and a high top speed. At around 400 pounds, this bike was quite quick for the time and was capable of 80 Miles per Hour!

This Police H-D and OEM sidecar was originally ordered by Toronto Harley dealer Bert Kennedy for the Toronto Police Department. This machine was subsequently loaned to the Ontario Provincial Police; who used the machine in their displays for a great many years. These are very rare machines and this one – even in its “survivor” state has incredible presence. Also available is the original, restored H-D Police side car ( pictured). Additional details at www.vintagemotorcyclesforsale.ca.